It’s not all sunshine and rainbows 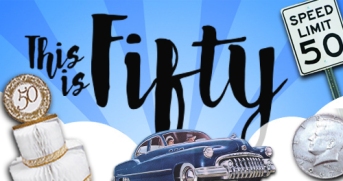 Part of a sporadic countdown to 50

67. (It’s only fitting that I end the brief break from the countdown with 67 days to go – as in, ’67 was the year that really got this countdown started …)

There have only been a few times I’ve let my age bother me.

I was fairly traumatized by 25 because I was a whole quarter-of-a-century old. As a kid you don’t really think of your age in relation to a century, but 25 – that’s a different story. That’s a common fraction and you are that common fraction of a birthday most people never see. You’re 25 percent of your way to 100.

Thirty bothered me only temporarily before the actually birthday – but once it arrived I realized 30 wasn’t so bad. It’s like once you lost that “I’m 20-something” attitude, people started taking you more seriously.

Then the 40s came, and I wasn’t too disheartened at all. A co-worker was once amazed when I wrote a blog for work about having had to go to driver’s school – not because I shared my penchant for speeding tickets with the public, but because I included my age. But as I neared 45 – and my first mammogram – I suddenly started wishing I was younger. Or that they’d moved the recommended age of the first mammogram to 75.

A new fear has replaced the mammogram fear, and I’ve made the irrational decision to talk to friends and relatives who have been through it.

At 50, it’s highly recommended that you have a colonoscopy.

From what I’ve been told, the procedure itself is simple. You’re given anesthesia, and you wake up an hour later and it’s over. But the 36 hours before it?

I was the recovery buddy for a friend, and saw how loopy she was when the procedure was over. Both she and another friend have offered to give me a ride to the hospital and be my recovery buddy after, but have both assured me they won’t be with me during the prep period.

“Trust me,” says my friend who just had hers in January, “you won’t want anyone there for that. You won’t even want your dog there.”

Wanting to get a more medical explanation of what to expect the night before, I turned to WebMD (yes, I know I work in a hospital …), where I was cautioned to “stay in the bathroom — bring something to entertain yourself, like a book, television, or laptop.”