For the love of dog … 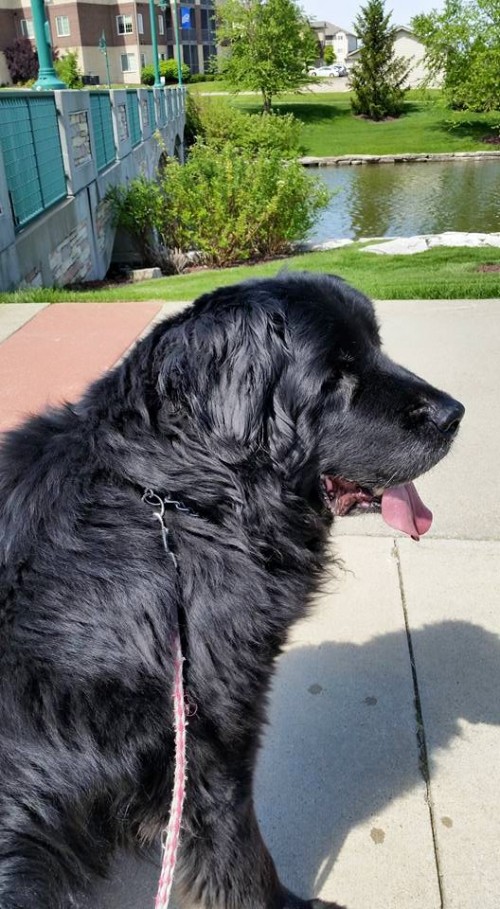 I’m a dog lover, there’s no question about that. I can’t remember a time in my life – other than the year or two we were in an apartment in Minneapolis when I was 4 – that there hasn’t been at least one dog in my life (the actual canine kind, not the male human kind – that’s another post altogether). I didn’t have a dog with me when I was in college, but there was always a faithful pal waiting for me when I’d go home.

And these dogs weren’t just any dogs – they were big dogs. Always. Growing up we mostly had German shepherds or German shepherd mixes, and then when I got married we had Labs, Lab mixes and Newfoundlands.

It’s no surprise, then, that I also love those sappy videos you see on Facebook, how this dog was saved from homelessness, or how this dog abuser got schooled by a group of old ladies who defended the dog, or how this dog found his way home when he got lost on vacation. I can’t help it – I always watch them, and I always cry. And I always think, “What a great story.”

This morning Mia and I had one of those stories of our own.

Mia is my 8-year-old Newfie, and our morning walks are typically about a quarter of a mile – she needs to walk a bit to “get things moving,” and Lord knows I could use the extra steps. So we went out for our walk, a little before 7 a.m., and as we’re coming back a semi pulls up to the stop sign and kills the engine. The driver leans out his window and asks about Mia’s age, then just climbs out of the truck – it was stopped in the northbound lane – and comes over to chat.

We’re kind of used to this, as I’m sure many people with giant breeds are. People stop all the time, asking if they can pet our dog. Even more people drive by and keep their eyes on the dog. I’ve had several people call me “the lady with that big dog.” They’re kind of a novelty to most people, and it’s that difference that brought Mia to us. We had lost our first Newfie to old age six years ago today, and in March 2010 I just happened to see an ad that read, “Free to good home, 3-year-old female Newfoundland.” I called about the dog – the owners apparently thought it would be neat to have a giant breed until they actually HAD a giant breed. They weren’t really prepared for the space she needed, the food she ate, the poops she took – any of it. So they decided to get rid of her. If I didn’t take her, they said, they were going to put her in a shelter.

I had a Lab mix at the time, but we made it work. We had to.

So back to this morning and the truck driver.

The driver knelt down and petted Mia as he asked me where I’d gotten her. I told him she was a rescue of sorts, and related the story. He then told me that he and his wife used to breed Newfoundlands. They had had two females and a male, and loved the gentle giants, but when the girls died and they sold their home, they decided not to get a new dog until they got settled. That’s still not happened, he said, but it’s something they still talk about. For someday.

He asked how old Mia was, and where her first family lived. For the life of me I couldn’t remember their last name, so that didn’t help him place them.

I was kind of struck at the patience Mia was showing. She’s an attention whore, to be sure, so she loves being petted. But usually she’s trying to give kisses or is moving around or showing other small signs of minor anxiety – as if saying, “Yes, this person can pet me, but only for so long.” With the truck driver, however, she was calm, just sitting there basking in the attention.

Then it happened. The driver asked me if I knew what her first family had named her. (At this point I still hadn’t told him her name.)

His eyes grew wide and teared up all at the same time. He choked up a bit, then asked, again, how old she was. I told him she’s 8 this year.

“She’s one of my pups, I just know she is,” he said. He and Mia were now looking eye to eye. “We had a Mia about that long ago – she’s one of Myrtle’s pups.”

About that time traffic started to come up on his truck and he needed to go. I didn’t get his name, he didn’t get mine – but we didn’t need it. He and Mia reconnected – I could see it in her when he was petting her – and then we all went back to our regular days.

Our steps were just a little bit lighter.