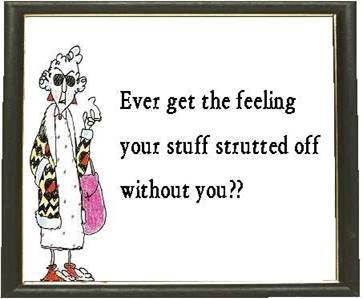 For the record, I love my 40s. I’ve been saying it for, well, five years now, and it’s still true. I was a little intimidated by them before they got here, but once I turned 40 I realized the number isn’t the same as it was – or how I thought it was – when my mother was 40.

That was, until recently. Suddenly I feel old. Not put-me-in-a-nursing-home-so-I-can-chase-birds-with-my-walker old, but old all the same.

It started in March and seems to have made a monthly progression to now.

March – My son, then 19, started looking at apartments and for a roommate, found one of each and made plans to move out the first of April. <ding>

Oh! And Man/Boy moved out as planned. <ding ding>

July – July almost went without a hitch. Usual summer activities, got with friends, hung out with the Manfriend (hey, he’s 50), lived life and enjoyed it. Then my then-16-year-old daughter and I went on a whirlwind trip to Chicago, where she met with several modeling agencies and had three express serious interest. Suddenly, I saw her as her 3-year-old self living in Chicago – and wondering if she’d know what to do. <ding>

August – Now we’re here. Tomorrow morning that same daughter starts her last first day of high school, her senior year. She’s giddy, has spent the last week wondering what to wear (she actually contemplated sweats so it wouldn’t look like she thought it was a big deal) and is ready to get the year over with and start her life. <ding>

I, on the other hand, am ready to go whimper in a corner and wish the clock back 12 years.

Or maybe just five. Because I really do love my 40s.

**Disclaimer: Because I have guilt (hey, I’m Irish. Guilt is what we do). I by no means think 50 is old. I have many, many friends who are 50 and older, a few who will hit that magic number this year, and well, it’s just not old. Thinking of myself dating someone who was 50, though – that just seemed odd. Because I am, after all, still in my 20s. And 30s. And … well, you get it. Don’t you?