Who put that scale there?? 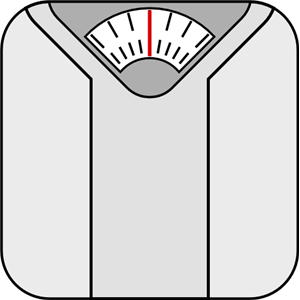 I put it off for years, convincing myself that I didn’t really need one, that isn’t what it’s all about and it’s just going to make me miserable.

Then last week, in a fit of poor judgment, I did it.

I bought a bathroom scale.

It wasn’t an easy purchase. Oh no – I held that box, turned it over and over, hoping to find a disclaimer: “Objects placed on this scale are smaller than the numbers say. Really. A lot smaller.” Finding none, I put it in my cart and continued with my shopping.

It’s amazing, being able to buy something like that at the same place you buy your groceries. That scale mocked me through the entire shopping trip. Just as I was about to turn my cart down the frozen foods section for my favorite cup of Ben & Jerry’s, I swear that scale turned on from inside the box and started beeping. When I went down the chip aisle, the box started to vibrate, and as I neared the deli the scale leapt from the front basket of my cart into the back.

Instead of going home with a pint of ice cream, a back of tortilla chips and a scale, I walked through the door with a flat of water, three different kinds of fruits and cucumbers and zucchini for slicing.

Of course, the scale couldn’t be happy with altering my eating habits, ohhhh, no. It sat on my couch – still in the box – just staring at me with that beady little number window for a full night, daring me to open it and step on.

I held out and showed that damned scale – it had to sit there on my couch, by itself, all night before I opened the box and put the scale in its new home on my bathroom floor.

And it mocked me even more.

I wish I’d known when I picked it up at the store that this digital scale, when it’s turning on and warming up, has three little circles that rotate around each other – kind of like a cute little digital laugh.

“You’re going to step on me and expect to be happy but you won’t be!” I could almost hear the childish voice singing, taunting me. Daring me to step on and be disappointed.

So I stepped on that scale the second day. And the third. And then the fourth. I never did see the numbers I wanted to see.

Maybe I should return it for “disappointing results.”

If only I could find that damned box …