Social media has made it even easier to share things – or harder to keep things to myself, however you want to look at it. Follow me on Facebook for just a few days and you’re going to know more about me than you may have ever wanted to know. I went to a cousin’s birthday party a few years ago and, at separate times, her mother, brother and father all commented about how all of Facebook would know what was happening at the party because I was there. 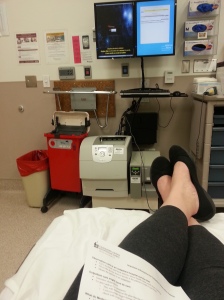 This was my view for the nearly seven hours I was hooked up to a heart monitor and on oxygen at UI Hospitals and Clinics earlier this week.

For all it’s benefits, though, there are some downsides to social media, too. While I personally think it’s great to share some things – including an endless supply of snark and sarcasm – with my friends and family, there are some things that have always been private, and always will be. If I have a personal disagreement with someone I care about, you won’t know about it by reading my Facebook timeline. I won’t make vague posts about my unhappiness with someone close to me, or use Facebook as my personal aresenal to call names to or belittle any of my friends.

There are some things, however, where the line is kind of blurred – more specifically, health issues. Don’t get me wrong, I have no trouble posting when I do something stupid that results in a doctor’s appointment or a splint or a rehab boot – like breaking my pinky toe while putting on my pajamas, or hurting my knee when Mia the Newfoundland head-butted me to sway me in her direction. I post about my migraines, the flu, stupid head colds and achy bones.

But the big stuff? How do you handle that? The kind of stuff where you know it’s serious, you know there are people who should know what’s going on, but you don’t want to post it on Facebook and look like you’re trying to get attention. The I-went-to-the-hospital kind of stuff? It’s not that I wouldn’t post it – God knows I would – but when do you put it up for public consumption?

I faced this very issue earlier this week when I went to the emergency room following a “minor cardiac event.” We’re still not sure what it ended up being, but emergency room doctors told me I had all the indications of a minor attack, but a CT scan of my heart showed no damage and no clogged arteries.

The “event” happened while I was at work – and luck would have it that I work in the best hospital in the area. I was sitting at my desk working – nothing stressful, just writing, because that’s what I do, I write. Suddenly I had this searing pain under my left breast, kind of like that side ache we used to get as kids when we’d run too much or too fast or for too long – kind of like that, but worse, and higher. It lasted for a good 8-10 minutes before it even started to subside. I tried doubling over, bending to the side, even standing up to make the pain go away and nothing worked. Once it finally did stop I was left with a pain in the back of my neck and in my left jaw.

The jaw pain was what stopped the 24-hour nurse from asking questions. Once I got to that, she told me to head to the ER immediately. So I did. When you go to the ER with complaints of chest pain, you get to go to the front of the line. No waiting in the waiting room, you get an EKG and then sent to a room. Not long into my stay they told me I’d be staying overnight for observation (that changed with the clean CT scan, but not until right at the last minute).

My first thoughts were to wait and see how everything came out before I told anyone, but I was already texting Mark about regular “stuff” when I got sent to a room, so I shot him an, “Oh, by the way, I’m in the ER getting my heart checked out” text. Classy, I know.

The more I chatted with Mark, the more I knew there were some people who had to know where I was. My kids. My parents. My list grew, but then the doubt started setting in: Do I tell others now, while I’m still here, or wait until I go home? Or at least until I get out of the ER and up to the room I thought I was going to be in? Do I post it on Facebook? No, I know I’d catch holy hell from quite a few people if that’s where they first heard about it. If I tell people now, will it seem odd, like I’m an attention-seeker, or do I tell them now because they’ll want to know? Who do I tell immediately, and who finds out on social media?

I don’t know that I know the right answer even now. There were a handful of people who knew I was in the hospital on Monday, but most everyone found out later. Today, in fact, in an email I sent to some letting them know what happened so they’d hear it from me before reading about it in this blog or on Facebook.

So if you’re offended because you’re just hearing about this now, and this way, I’m sorry. I guess I’m still learning.

(The heart issue came out OK, no overnight stay – just orders to follow up and reduce stress. Ha! Yeah, right …)

I think you’ve got the wrong number …

When your cell phone number spells out something profane, chances are pretty good you’re going to get a few prank calls.

Trust me on this – I speak from experience.

I was selling real estate 10-11 years ago, with a business partner/boyfriend, when we both switched cell phone carriers and received new numbers. Neither of us thought anything of our numbers until we saw other Realtors who had personalized their phone numbers: 319-SELL-IOWA or 319-SHE-SELLS. Something like that. 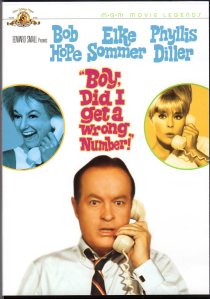 He thought I meant my numbers spelled gibberish, too.

Actually, they spell out, “AH_-SHIT.”

Not exactly the kind of thing you want on your business card. It didn’t work so well when I stopped selling real estate and became the faith and values reporter at The Gazette in Cedar Rapids. You don’t really want to hand a card to a minister with a shortcut like that.

It wasn’t long after I got the new number that I started getting prank phone calls, usually from someone drunk, most often between 1 and 3 a.m. “Hey, do you know you’re shit?” “Awwww, shit.” “Can I have your number? I want shit.”

And so it went. I even had one co-worker ask me to let him know if I ever wanted to change my number – he wanted to take it over.

I never did get rid of the number; I guess it just got too easy to tell people if they wanted to remember my number, there was a really easy way. And somehow, the prank calls stopped. Apparently it became less funny to be drunk and look at your phone to see what kind of obscene telephone numbers were out there, and who really had them.

Now with the popularity of texting, the wrong numbers are much more humorous – and maybe a little frightening.

A few months ago I received a text from a man telling me he’d changed his mind, he was willing to give it a shot and could I meet him somewhere to deliver the package. Me being me, I texted him back that he’d gotten the wrong number but “good luck with the package.”

He then felt the need to tell me he had changed his mind on giving up women and that the package was a new sex toy designed for men who didn’t like women. But hey, “while I’ve got you, you could try to help me change my mind again.”

Then there was rant I received a few days ago from a guy who swore we’d been in a heated argument the night before.

He then sent me three screen shots of the heated text argument he’d been in – complete with the other phone number, the one that was close to mine, but wasn’t mine.

I pointed that out to him.

“Oh, I have the wrong number.”

It may be time to consider a new number …